When your mission is critical

This is the scene:

Officers are hot on the heels of a speeding driver. He crosses the border into a neighbouring country, where local officers join the chase.

But the pursuit ends in disaster as the reckless driver enters a tunnel and crashes. The confined space and thick smoke make any rescue attempt much more difficult.

Such a complex situation calls for all-round, seamless co-operation between several different agencies and information systems in control rooms. Here's how it would work:

In the control room …

An officer presses the “start pursuit” button on his touch-screen panel, and away they go. The on-board camera tracks progress and streams video footage back to the control room.

With the suspect vehicle in their sights and visible to the on-board image capture system, the officers run a vehicle check at the touch of a button.

Sure enough, the car is stolen.

At the crash site …

The suspect is speeding through a tunnel when he loses control of the vehicle and crashes.

Officers open a new traffic incident in a special command and control application, which results in a call for backup from fire fighters and medics. The dispatcher forwards a copy of the tunnel floor plan, together with a photo of the crashed vehicle taken from CCTV footage in the tunnel.

The officers grab their TH9 handheld radios and head into the tunnel on foot. It’s a long tunnel and they lose touch with the radio network. They can still talk to one another in Direct Mode.

Even in this hazardous and confusing situation, the officers are confident that if any of them stops moving for too long, the Lifeguard function on their radio will alert the rest of the team that they may need help.

Police officers and fire fighters manage to rescue the driver. He seems unhurt, but the paramedics check him over. Officers use a handheld scanner to read the driver’s license and pull up his records so they can be sure whom they’re dealing with.

The officers head back to headquarters as the paramedics rush the driver to the hospital.

This imaginary scenario is an example of how comprehensive communications capabilities can support public safety. Vehicles are on the way of becoming mobile offices where professionals can do their jobs faster, more safely and more efficiently. 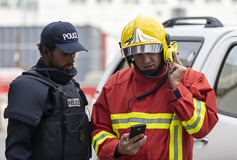